skip to main | skip to sidebar

(If you have no idea what the IKAN Bowler is, please see the intro to this blog, scroll way down or click HERE:)...

Here are three pictures from the movie Smother, which is set to be released in late 2007. Smother stars two from Hollywood's A-list, Diane Keaton and Liv Tyler, and an up-and-coming actor, Dax Shepard (see the link above for more details). As you can see in the pictures below, the IKAN Bowler was used in filming a scene for the movie. Assistant producer Stanley Monahan found the IKAN Bowler, contacted us, and of course we were quite excited that they wanted to use the IKAN Bowler in their movie. What was surprising (in a good way) was that they put the IKAN Bowler on a 3-wheeled scooter! That could potentially open up bowling to another group of people, scooter users, in addition to power wheelchair users. We were told they also had the IKAN Bowler on a wheelchair, but we really have no idea as to what will actually be shown in the movie. The movie's central figure (Shepard) is a physical therapist and apparently there's a scene where he's with someone who is using the IKAN Bowler (it's therapeutic recreation:). But I'm kinda guessing on that, I really don't know how or even if it will make the final editing cut. But these pictures show that they used the IKAN Bowler in filming a scene for the movie... enjoy! :-) 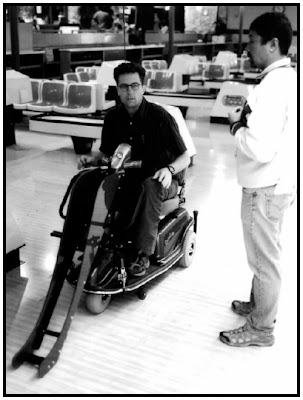 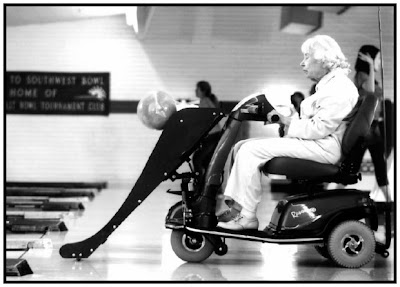 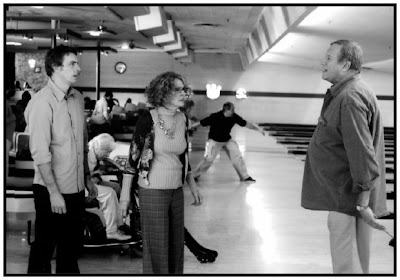 Above on the left I think is Dax Shepard, and in the middle is indeed Diane Keaton, a very accomplished actress that most movie watchers have probably seen in multiple films.

Posted by Bill Miller at 2:12 AM No comments:

Bill Miller
I started this blog to highlight how wheelchair users, especially power wheelchair users, are being empowered through sport, in particular: dynamic wheelchair bowling. It's actually bowling that emulates the able-bodied bowling process, i.e. setup, then physically approach and release the ball upon stopping short of the foul line. I happen to be paralyzed from my neck down, and ventilator-dependent, yet I've actually bowled 24 legitimate games of 200 or better. I say that NOT to brag, but to show what is possible and make the point that ANY wheelchair user who can safely operate their chair, they can bowl (I helped invent a device that makes it possible). Please look around and feel free to ask any questions! Thanks and God bless!